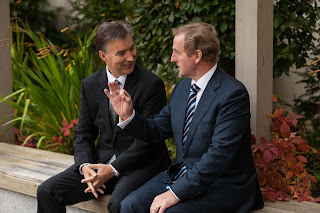 - The Taoiseach, together with 100 senior insurance executives from North America, Europe, Asia and Asia Pacific, attended the event


- A 10% growth in customer numbers is reported in last quarter following closure of 4 new deals, with 2 in US and 2 in Australia

Dublin, Ireland, 11th October, 2012 – FINEOS Corporation, a global provider of claims management software, today announced that it has achieved a quarter of a billion euro worth of software and services exports over the last ten years. The news coincided with the visit of more than 100 senior insurance executives from North America, Europe, Africa, Asia and Asia Pacific to Dublin for the FINEOS Claims Global Summit.

FINEOS is on a strong growth path and has seen a 10% increase in its customer base in the last quarter, following the closure of four major new clients, with two in the US and two in Australia.

The company continues to make very large investments in people and research and development as it aims to become the world’s number one claims software company for the insurance industry. It announced that its summer graduate recruitment programme has just concluded with 12 graduates appointed.

Speaking at the Summit at the Ritz Carlton in Wicklow, Michael Kelly, founder and CEO said, “Our business is very buoyant and we are ramping up to meet new customer demand. We are continuing to innovate new products which will allow us to significantly broaden our customer base and open new geographic markets, with China in particular offering strong growth potential.

“The key to our development so far has been our focus on providing complete claims solutions which excel at managing complex claims. We streamline the insurance claim process, from first notice of loss, to payment, recovery and closure. We built our business by being ultra customer-focused and ensuring that everybody - from the insurer to the claimant - have a positive experience of claims process.

“We have had some notable achievements in the recent times. Our flagship FINEOS Claims product handled €2 billion of insurance claims payments in the last 12 months and we estimate that 40 million claims are now in our system around the world.

FINEOS’ global success includes the fact that it processes: claims for five of the top eleven group life and disability insurers in the US; 100% of all injury and illness compensation claims in New Zealand; 30% of all government injury and illness claims in Australia; and 30% of the general insurance market in Ireland.

FINEOS is building new out-of-the-box software products to cater for different lines of insurance business and the needs of smaller insurance companies.

Taoiseach, Enda Kenny T.D. said, “I welcome the first FINEOS Summit to be held outside of the USA. The Government, through its Action Plan for Jobs, is promoting the software industry as a priority area for growth and jobs. Companies like FINEOS show we can create truly world-class software businesses that can operate on a global basis and become market leaders in their specialties. The Government will continue to work hard on improving our competitiveness and building a strong base for exports so that companies like FINEOS can continue to grow and we can reach our aim of Ireland becoming the best small country in the world for business."
Posted by Editor in Chief at 13:39