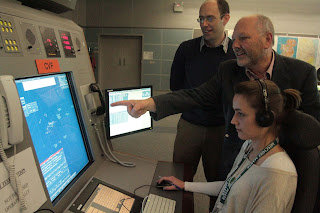 Pictured are Ger Caffrey, IAA, Brian McBride, Data Edge and Caitriona Corcoran, IAA.JPG
Data Edge, Ireland’s largest network and application performance management company, today announced a new ten year contract worth €2.5 million with the Irish Aviation Authority (IAA). The new integrated voice and video recording system will enhance air traffic monitoring and review procedures for more than half a million flights in Irish airspace each year. The deal is believed to be one of the largest of its kind in the European aviation industry this year.
The IAA is responsible for the management of Irish airspace which stretches for more than 500,000 square kilometres, and acts as a gateway between Europe and North America.From its world-class Air Traffic Control Centre at Ballycasey, Shannon, the IAA provides air traffic control and aeronautical communications on one of the world’s busiest international air routes. Air traffic controllers handle 80% of all flights that cross the North Atlantic from this centre. In 2011 alone, 522,959 private, commercial and cargo planes were guided safely through Irish airspace by the IAA.Following a Europe-wide tender by the IAA, Data Edge won the contract to provide a system capable of recording and replaying unified voice, screen and data interactions. The new solution will precisely document, replay and synchronise all of the communications channels that air traffic controllers in Ireland utilise when guiding flights safely through Irish air space and at the main Irish airports. The recording and storing of all audio and visual communications by the Data Edge system will allow for user friendly, swift, independent record and replay and an enhanced review process for the IAA.Data Edge’s solution will capture, on a continuous basis, exactly what an air traffic controller sees on screen, hears and says. This can include mouse clicks and keyboard actions and even, in future, text messages to and from aircraft. During replay, all of these sources are integrated to give the user an exact copy of the activities experienced by the controller. Precise time stamping and synchronisation is essential both to show when an event occurred and to ensure that the replay is synchronised to the sub second. This is achieved by an independent GPS based timing system, also provided by Data Edge.Although current legislation in Ireland calls for only aviation voice communications to be recorded, the UK has recently made screen recording a legal requirement. It is expected that this will become a Europe wide requirement shortly. The new unified recording solution will ensure all of the IAA’s stored voice, video and data communications can be used as legally admissible evidence for incidents of any kind once the enhanced recording requirements take effect.The IAA operates a large training base in Ballycasey, used to train both new intakes and provide in service training to existing air traffic controllers. The new system will offer major benefits to these programs as it will allow students to review real life events including all the audio and screen transactions experienced by the controller.Data Edge is currently installing a combination of technologies from Atis-Uher, SkySoft and Symmetricom, with the new integrated system to go live early in 2013.  Data Edge will also maintain, support and update the systems for the next ten years, working closely with the IAA to ensure it is getting the most from the system and meeting best practice guidelines.Ger Caffrey, Project Manager IAA, said, “The integrated recording systems from Data Edge will provide us with added confidence and security as we continue to manage ever-growing volumes of air traffic and increasingly stringent safety legislation.”Brian McBride, Managing Director, Data Edge, said, “The IAA is internationally recognised as one of the most important and pioneering aviation authorities, managing one of the world’s busiest air spaces. It consistently invests in its systems and people to ensure it can safely guide tens of millions of passengers through Irish air space each year.  Being selected to deliver and manage such a vital element of the IAA’s air traffic control infrastructure is a great endorsement of our entire team.  This project is certainly one of the most exciting and innovative that we have ever been involved with.”
Posted by Editor in Chief at 11:02