Ireland has been 'through a hurricane' 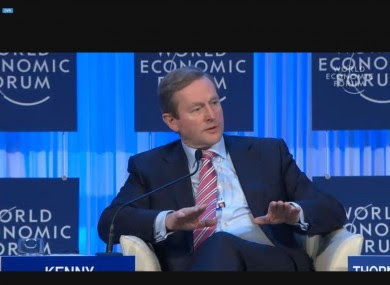 THE TAOISEACH ENDA Kenny today said that Ireland has been “though a hurricane” in its struggle to deal with the European debt crisis.
Speaking at the World Economic Forum in Davos, Switzerland, Kenny shared a panel with the heads of state of several other European countries: Italy’s Mario Monti, Denmark’s Helle Thorning-Schmidt and the Netherlands’ Mark Rutte.
The annual meeting of the World Economic Forum sees world leaders and influential businesspeople meet to network and discuss issues affecting the global economy. The theme of this year’s meeting is ‘Resilient Dynamism’.

Read More
Posted by Editor in Chief at 14:54