The Minister for Jobs, Enterprise and Innovation, Richard Bruton T.D., today (Friday, 15th March, 2013) announced details of the €1 million initial investment in a research programme in data analytics, a key sector growing at 40% per annum worldwide targeted for jobs growth as part of the ‘Disruptive Reforms’ in the Government’s Action Plan for Jobs 2013. 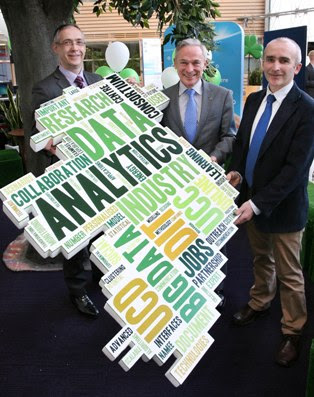 Top-tier multinational and Irish ICT companies will lead the research agenda at the technology centre. CeADAR’s industry partners include:  eBay, Accenture, Dell, Fidelity Investments, Adaptive Mobile, Climote, Cylon, GBR, HP, Moving Media, Nathean Technologies, Nucleus Venture Partners, and Qumas.   Research will be focused on developing ways of generating business, profit and ultimately jobs from the high-growth area of data analytics.
Data Analytics is about the conversion of large amounts of raw data into valuable information through the use of statistical techniques and advanced software. An Enterprise Ireland and IDA Ireland initiative, the initial research phase of the Technology Centre in Data Analytics called CeADAR, the Centre for Applied Data Analytics Research,  will aim to make Ireland a world leader in this area.
Data Analytics is a key target sector identified as a Disruptive Reform in the Government’s Action Plan for Jobs 2013, growing at 40% per annum worldwide and offering major potential to Ireland due to established advantages in this area. Establishing an industry-led Data Analytics Technology Centre to work on developing viable business tools in this emerging area is one of the major actions contained in the plan aimed at realising this potential. Today’s announcement comes as part of a series of initiatives by Minister Bruton today to target jobs growth in this sector.
CeADAR will conduct initial research into technology challenges that have been identified by industry representatives. Led by University College Dublin, the research consortium which includes University College Cork, and Dublin Institute of Technology, will use the funding to work with a group of companies to accelerate the development, deployment and adoption of Data Analytics technology. This initial research programme is a significant step towards a government funded 5 year investment in a Technology Centre for Data Analytics.
CeADAR’s lead team will be based at NexusUCD, the Industry Partnership Centre at University College Dublin.
Making the announcement today, Minister Bruton said:
‘A key part of this Government’s plan for growth and jobs is identifying areas where we believe Ireland has distinct advantages compared to other countries, and taking steps necessary to ensure that we realise our potential for employment in those areas. Data Analytics is one such sector, and the Government believes that between our climate, skills base and existing strengths in ICT, we have the potential to reap substantial benefits in terms of jobs and growth from the global expansion of this sector.
‘Establishing an industry-led technology centre in this sector will ensure that the major research strengths we have built up over the past decade are directed firmly towards viable business ideas and ultimately jobs. I am determined to ensure that through continued implementation of our plan, we target growth in key sectors and create the jobs we need’.
According to Gearoid Mooney, Director of ICT Commercialisation at Enterprise Ireland, ‘Data is only as valuable as the information and insights we can extract from it. Industries across the world are looking for ways to extract information and insights that will help them make better decisions and create competitive edge. The focus of the researchers in UCD, UCC and DIT will be to create new technologies, usage models and commercial applications to address the short to medium term technology needs of the Irish based industry.’
Deirdre Lambe, GCO EU Project & Programme Management -eBay, one of the participating companies, said, ‘We got involved in CeADAR because we have a network of analysts across eBay Inc who are dealing with big data challenges on a daily basis and we recognise the need for a joined-up approach to strong data analytics solutions across the board in all types of industry for all user levels.’
Professor Peter Clinch, UCD Vice-President for Innovation said, ‘CeADAR brings together innovative companies and world-class Irish researchers from UCD, UCC and DIT into a powerful innovation partnership to perform leading-edge research in the area of big data. We are confident that CeADAR will help to position Ireland as a “go-to” country for future big data solutions’.
The CeADAR project leverages the research clusters and technologies created by prior Science Foundation Ireland investments.
Posted by Editor in Chief at 19:40