CoderDojo held its 2nd annual mentor conference, DojoCon2013 in Drogheda and Slane Castle on 12th and 13th April. This year, over 220 attendees from around the globe gathered to exchange proven ideas for growing the international movement.


This year's conference theme was 'Growing & Sustaining the Global Movement'. The intention was to get as many mentors together to listen to each other, exchange ideas and create methods of future collaboration. In just over 2 years, CoderDojo, the coding club for young people aged 7-17, has over 180 clubs over the world. Every Saturday, there are dojos from Dublin to New York; Glasgow to Melbourne with over 16,000 children learning to code. 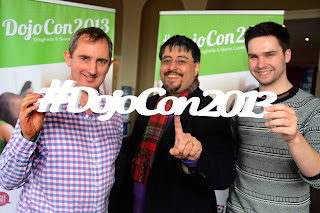 During the two days, it became clear that there were five key take-aways. These include the need for more mentors, more dojos, more female involvement, more parental involvement and a greater need to share content between the dojos.

“The feedback from the conference was that of excitement, inspiration and ideas to make every individual dojo a success. Above all, it was one of togetherness. There is a huge amount of goodwill around CoderDojo by the mentors and parents. Everyone is committed to growing it into an organisation that sustains itself and fulfils the appetite that exists for CoderDojo.” said Paul Browne, one of the organisers of DojoCon 2013 and a mentor in Drogheda Dojo.

Graham O'Rourke, another organiser continues “The demand for Dojos is very real with many dojos over-subscribed by 2-3 times. In order to fulfil this demand, we need more mentors to get involved. As a mentor, I want more young people involved. You get immense satisfaction of seeing the progression that children make. We need more people to help out so we can have a rota of mentors that we can rely on.”

CoderDojo is free but as Bill Liao, co-founder of CoderDojo says “it's not a free ride. We need more parents to get involved, to roll up their sleeves and contribute. It's not a monetary contribution but a time and effort involvement. That will be instrumental to the continued Dojo success.”

James Crook, another one of the organisers of DojoCon2013 and mentor in Science Gallery Dojo takes up this point of parental involvement. “Some parents feel that feel that because they aren't IT professionals, they can't help. But I say to them that they can help in any way. Just as they help their kids do homework on subjects that they have seen in 20 odd years, they can help their child with programming by following our advice.

It's the belief that parents have for their children, regardless of ability, that they can bring to every dojo. And it's not just children who get engaged; I've seen parents lose hours in coding with their children.”

DojoCon 2013 was unique in that a gender balance of speakers, 50% of the speakers were male and female. One of the female speakers flew in from the US exclusively to speak at DojoCon 2013. Kimberly Bryant, founder of Black Girls Code shared her vision for why she set up a similar organisation. “We need to get more girls involved. Technology is not a boy's club, it's for everyone. But before we do that, we should get more female mentors involved. That's what I did. Before I looked for girls to attend, I looked for female mentors that would inspire the girls and someone with whom the girls could relate.”

Bryant continued “There is an African saying that I say often – teach a woman, teach a nation. It inspires me and drives my passion to get as many girls involved as possible”.

Michelle Graham, a mentor in Dundalk, experiences the gender imbalance and is also actively trying to resolve it. “There are girls out there dreaming of creating games and apps, not just using them. We need to reach them aswell as their friends and encourage them to come to a Dojo.”

The number of women in technology, while always low appears to be getting lower. The E.U. average of 21.8%, or the U.S. rate of 24% of technology jobs held by women is down from 36 percent in 1991, according to the National Centre for Women & Information Technology, at the University of Colorado in Boulder.

Many of the speakers spoke about the latest in technology, with experts sharing their expertise on using robotics, electronics, motion sensors, computer languages such as Advanced Scratch. These forms of technology inspire mentor's interest and passion which drives the children to learn more.

One discussion point that was continually being brought up was the need to share content. Instead of dojos working in a silo creating the same content, that the content should be shared. A central place for keeping content, structure, ideas for growing a dojo was suggested. This is a key action that has been taken away by the founders.

In addition to the formal speaker programme, a dojo was held in the Castle. Children from local dojos were invited to attend and the Dojo 'sold out' within 11 minutes. Young people got to meet their own rockstars, James Whelton and Bill Liao, who spent time seeing what the children and young adults were creating.

The final words went to the co-founders. James Whelton said “We can't do it alone. We all need each other. Over 200 people are here who give of their time and talent freely and willingly to our children and there are hundreds more around the globe. We need to think about 10 years into the future aswell as next year as CoderDojo is a catalyst for change.”

Bill Liao concluded “It's amazing to see young people engaged and challenged. That drive, that ambition, that will to change the world. If the CoderDojo community can help these children and young adults to unleash their creativity while having fun doing it, then we know we have made a difference – to the children themselves, to the world around us and the future is bright.”

The DojoCon 2013 was organised by CoderDojo volunteers from Drogheda, Dundalk, Dublin, Limerick and Navan. They are so committed to the success of CoderDojo and DojoCon 2013 that they have given their time voluntarily for the past 6 months.

They would like to thank the many sponsors involved including Hello World Foundation, RTE Digital, Louth County Enterprise Board, DKIT, Drogheda on the Boyne, Meath County Council, Enterprise Ireland, GitHub, Coca-Cola, Intact Software, Fitz Scientific and Lord Henry of Slane Castle. They would also like to thank the many supporters who gave their professional expertise and service voluntarily.
Posted by Editor in Chief at 18:31