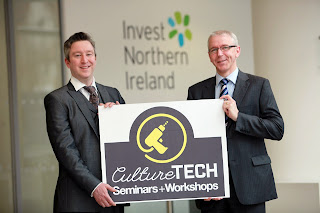 CultureTECH, the digital technology and media festival which will take place in Derry-Londonderry this September has announced details of its partnership with Invest Northern Ireland.


Brian Dolaghan, Invest NI Director of Technology and Services said: “We were delighted to be involved in the first CultureTECH event last year. Not only was it a highly innovative event but it has created a tremendous showcasing opportunity for the Northern Ireland creative industries, particularly those from the digital and media sectors.


“This year, Invest NI will be running a series of workshops to outline the range of support and advice available to help companies in these sectors to trade successfully and compete in a global market.


“Invest NI's partnership will see the inclusion of over 20 branded seminars and workshops across the week, focusing on key export-focused topics. These will cover subjects such as market research, export skills, intellectual property advice, technical support and financial support. The investment will also support entrepreneurship events for young people as part of the CultureTECH Junior strand of the festival.”


Festival Director Mark Nagurski explained: “Working with Invest NI is a pretty obvious one for us as one of the key motivations behind CultureTECH is to see the creative digital sectors in Northern Ireland grow. The workshop programme gives that aim some substance and brings a completely different dimension to the festival that simply wouldn't happen without Invest NI's support. We're also hoping that Invest NI will use the festival as an opportunity to bring many of their overseas contacts – and in particular, potential investors – to the city and region to catch a glimpse of the sector at its best.”


Speaking about the notion of creating a pop-up Invest NI office in the middle of the festival, Mark added: “The idea of the pop-up office just seemed like a simple way of making these sessions – and Invest NI - a real part of the festival. Business doesn't have to be boring. In fact, the creative industries are some of the most exciting places to work or start a business. So we're placing this right in the middle of the video games tournaments, music events, film screenings and digital arts exhibitions that make up the rest of the festival. It'll be a blast.”


All of the workshops and seminars funded by Invest NI will be free to attend but places are limited. Full details of the programme will be released over the next few weeks on the CultureTECH website at www.culturetech.co, where you can also register your interest in advance.
Posted by Unknown at 17:18