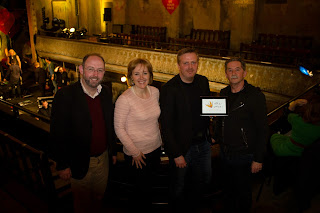 Following their hugely successful events in Dingle, Derry-Londonderry and London, Other Voices, the internationally acclaimed music series from Ireland, has today launched a year-long digital innovation challenge to find the best new technology ideas to incorporate into the series. The challenge is being delivered in partnership with CultureTECH, the annual digital festival in Derry-Londonderry, and boasts a €10,000 prize fund and the chance to work directly with Other Voices.


The series already attracts an enviable global audience, both on TV and online, but it is the opportunity to use digital technologies to broaden that reach and strengthen the relationship with viewers that is the driving force behind the Other Voices Digital Challenge.


“The early and enthusiastic embrace of digital technology and its possibilities has been at the core of our journey at Other Voices over the last decade. It has been the ultimate enabler in how we platform to the world from our home at the very Western edge of Europe – bringing the unique, the local, the intimate musical experience of Other Voices to global audiences. Following on from our recent successes in bringing Other Voices to the UK Capital of Culture, we are delighted to take the next steps on the journey with CultureTECH and Derry-Londonderry.”


Submissions are being sought from companies and individuals across the UK and Ireland, with the top six ideas, as selected by an industry panel, being given the chance to showcase their ideas as part of the CultureTECH festival in Derry-Londonderry this September.


Other Voices have created a really simple brief which outlines the kind of ideas we’re interested in. Anyone can submit an idea - whether it’s already being developed or not - and we’ll bring the top six to Derry to tell us more in front of a live audience. Other Voices will then pick two overall winners, who will receive €5000 each and the chance to work with Other Voices to develop their ideas further, before heading down to Dingle in December to put them into practice.”


“The cash prize is obviously great, but for a startup technology company - or just someone with a smart idea - the opportunity to work with Other Voices, get access to world-class artists and showcase their technology to a global audience is the real incentive.” Mark added.


Following Other Voices Dingle in December, the two winners will also get the chance to showcase their efforts at a major industry conference in early 2014. Further details and submission forms are available at www.culturetech.co/challenge