Irish technology to help save lives in Western Canada

Dublin company Decisions [D4H] has secured a lucrative five-year contract with the Government of Alberta, Canada for their innovative software which improves vital emergency response efforts. Details of the contract were announced earlier this week during the Enterprise Ireland trade mission to Western Canada, which was organized in close cooperation with the Department of Foreign Affairs and Trade and the Embassy of Ireland to Canada and led by the Minister for Trade and Development, Joe Costello TD. 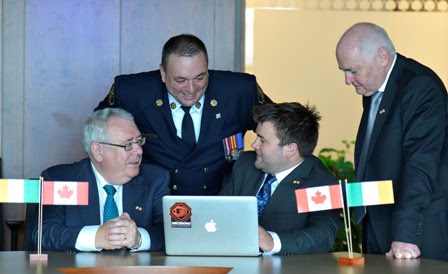 Decisions [D4H] whose mission it is to ‘Save Lives’ by improving how response teams are managed, will provide its software to 40 Canadian Search & Rescue (SAR) teams in Alberta. These SAR teams serve a population of almost four million across a landmass over seven times the size of Ireland. The software, which was created in Ireland, allows SAR teams to manage their incidents, personnel and equipment, and submit reports to Alberta’s Provincial Government for the creation of shared statistics.
Robin Blandford, CEO for Decisions commented:
‘We are excited to begin the implementation of the [D4H] software across all the Canadian Search & Rescue teams in Alberta; we feel the software will greatly enhance the critical work they are doing. The teams that have been using [D4H] internationally are huge fans of the system using it to generate incident reports, flag emergency responses and provide them with an all encompassing management tool that spans their entire search and rescue team’.
Welcoming the announcement Minister Costello said:
‘Decisions [D4H] is a great example of an innovative, export-focused Irish company with a world-class product offering. Their success in securing this contract with the Government of Alberta demonstrates the quality of their technology and underlines Decisions’ continued success in export markets around the world. I commend them for their commitment to developing new markets and I encourage other innovative Irish companies to do the same with the support of my Department, our Embassy network across the globe and Enterprise Ireland’.
Since its foundation in 2008 Decisions [D4H] has expanded into 11 countries managing responders in Petrochemical, Energy, Mining, Fire, Hazmat, Maritime, Pharmaceutical production and Public Safety. In Ireland clients include the Irish Coast Guard and Irish Water Safety. Interestingly, Decisions [D4H] is headquartered at the Baily Lighthouse, Howth. Showing their company’s commitment to saving lives and getting ‘really close’ to their customers, this famous landmark has been preventing loss of life in Dublin Bay for over 200 years.
Ross O’Colmain, who heads up Enterprise Ireland’s office in Toronto, added:
'This agreement between Decisions and the Government of Alberta clearly demonstrates the opportunities that exist for innovative and ambitious Irish companies in Canada and around the world.’
Posted by Editor in Chief at 11:41