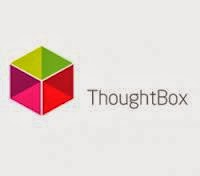 ThoughtBox is delighted to have teamed up with Irelands largest bookseller Eason. Eason has 60 outlets throughout Ireland and has just launched Easonology: an innovative experience designed to offer children, teens and adults a creative environment where they can explore and interact with books, games and technology. Eason: Play with Maths! for iPad powered by ThoughtBox is now available for download for FREE in Ireland and UK through iTunes - bit.ly/1ahzow6


ThoughtBox was founded by CEO Cristina Luminea in 2011 and in that time, has achieved various awards and grants. These include the NDRC Launchpad programme, winning the Blueface Business Elevator competition 2012; People's Choice Award at Dublin Beta 2012 and a place on the WAYRA Academy. ThoughtBox released a number of educational maths apps as part of their Numerosity suite, which won multiple awards around the world since their release including Apples App Store Best of 2012 in 15 countries and Best Educational and Gaming App at The Appies. Cristina was recently included in the Top 30 under 30 list in the Sunday Business Post.

“We’re very excited about working with Eason on this app to provide free, quality educational content for Irish kids and we see this as one of the many partnerships with companies to come, both here in Ireland and abroad. We have spent 4 years researching the educational space and understanding the way kids and tweens use and engage with technology and games. This is where our strength lies: we don’t just build – we respond to needs, wants, trends, patterns and behaviours. We build products with kids for kids” explains CEO Cristina Luminea.

With the multitude of devices inundating the consumer market and technology advancing so fast, customers don't respond to traditional marketing anymore. They want connections, engagement and openness. They want experiences and they want value. This shift, brought by social media and smart technologies is not just a moment in time, it is a starting point and paying attention to the consequences of this change will make or break companies.


Engage and interact with your target market through technology and games. ThoughtBox: helping businesses think outside the box.