Daddyo - from bump to birth and beyond – a survival kit for first time dads, in an app. 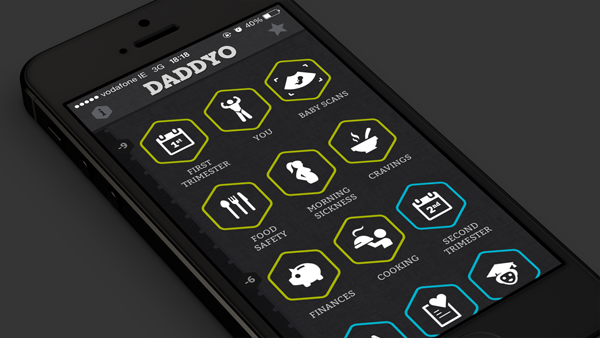 First time dads need help. They do the easy bit – get their partner pregnant – and then suddenly they’re worrying about trimesters, ultrasound scans and contraction times. And that’s all before the kid is even born.

Where are new fathers supposed to find out about this stuff? Can they be trusted to read an entire shelf of pregnancy books?

iQ Labs has taken the most important information and distilled it down into a single survival kit. And then put it in an app, so it can be taken everywhere and referred to whenever needed.

Created by first-time dads for first-time dads, Daddyo is an easy to use, illustrated guide to babies that covers all the critical steps, from the moment of conception, to the labour ward, to the baby’s first six months.

There’s instructions on sterilising bottles, changing nappies and pro tips on everything from doing bathtime the right way to avoiding the puke while winding a newborn.

And it’s not all about the baby. With over 42 separate topic covered, the app contains great, practical advice on how to deal with hormone-related moods swings, what new families need to budget for, and how to decide on baby names without arguments or physical harm coming to either party. A ‘favourites’ option also allows users to quickly access frequently used sections.

The app was originated by iQ Content’s Tom Cunningham, whose personal experience was the catalyst:

“As a first time dad, I was handed a bunch of books and told to get studying. I wanted something that showed me how to be a good dad and was always there just when I needed it. Thats why we developed Daddyo as an app. Daddyo delivers straight talking, good advice in bite size chunks to guys who are about to become dads.”

Daddyo is an iQ Labs project, which takes ideas from iQ Content’s team of developers and designers, and turns them into great products. “iQ Labs is all about enabling our team, helping them bring their ideas to life. Daddyo is our first dipping of our Labs toes into the commercial world ” says Ciarán Harris, Head of iQ Labs.

"Well done to Tom and the team on taking a great idea & bringing it to life brilliantly. iQ Content is all about creating brilliant and valuable digital experiences. Daddyo is a great example of this: using technology to make a special time even better. I wish Daddyo was available when I became a Dad! I never read the books, and learned the hard way instead."

iQ Content
iQ Content is a digital consultancy that creates customer-focused online experiences for some of the world's best-known brands. Today, iQ Content employs over 50 people and provides a full-service offering that is unique to Ireland, bringing together user experience, design, development and content under one roof. This end-to-end approach has attracted a long list of clients which include Vodafone, Goodyear, Citibank and the Danaher Group. iQ takes pride in attention to detail and the impact that intense research and deep understanding of a client's environment can have on the final product. iQ Content is based in Dublin, Ireland, with partner agencies in 25 countries worldwide.

iQ Labs in an on-going ‘innovate and create’ initiative that allows the talented team in iQ to experiment and play with new ideas and concepts in a client free environment. Led by Ciarán Harris, Labs carves time out from busy schedules to get designers and developers talking and working together on varied, self-initiated work that has a common goal: to generate practical solutions to problems worth caring about. Last year, iQ Labs had its first external release, Antenna, a free open-source mobile event publishing platform that is currently in use by the Dublin Event Guide. Daddyo is just the first of several commercial products that are in the Labs pipeline.
Posted by Pete - Northwest Editor at 09:44