Irish students spent 250,000 minutes on Maths with the MATHletes Challenge in the first month 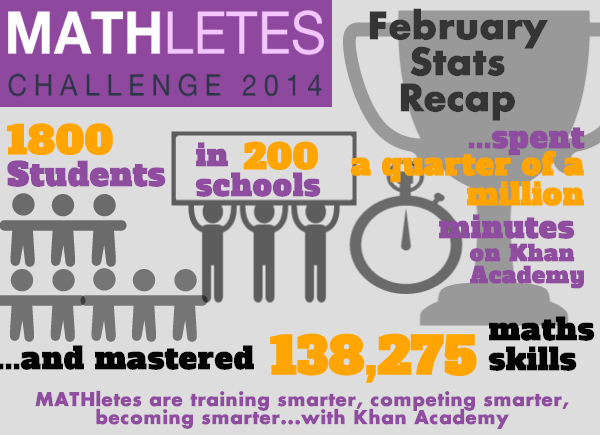 Irish students have spent 250,000 minutes on Maths, using the Khan Academy, as part of the MATHletes Challenge 2014. The challenge has entered its second month of competitive action, and what was just a concept at the beginning of the year is now a real living and breathing national maths competition.

Every week, when the maths challenges are posted online, over 1,800 students from over 200 schools are logging onto the MATHletes website to do battle against each other and on behalf of their schools.

Aswell as the €20,000 in prizes and the overall title of MATHletes Challenge Champion 2014 on offer, every month the MATHletes Monthly Challenge Cup is awarded to the schools at the top of the MATHletes leaderboards.

The momentum behind the innovative maths competition continues to grow at a phenomenal pace. During February, the number of students signing up for MATHletes had been doubling each week, going from 250 to 500 and then to 1000. However, last week saw a huge jump in numbers, with 800 students signing up - this represented an 80% increase.

Kelly Kirkpatrick from MATHletes said that “The MATHletes Challenge 2014 continues to go from strength to strength and the passion and enthusiasm from the students and teachers shows no sign of slowing down-if anything it is getting stronger the further the competition goes on.”
Posted by Pete - Northwest Editor at 08:35