Med tech firm ArraVasc Ltd., based in Galway, has signed a new contract with a leading medical device distributor Shanghai Micro Medical, based in Shanghai, China. The announcement was made during the Enterprise Ireland Trade and Investment Mission to China led by Minister for Jobs, Enterprise and Innovation Richard Bruton TD. 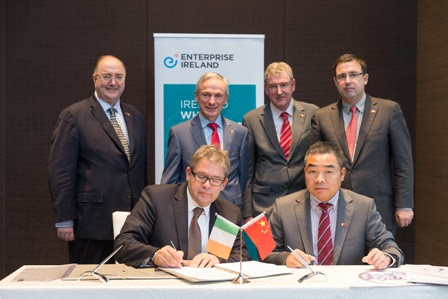 
ArraVasc CEO Jonathan Akehurst commented: “We are delighted to be working with our distribution partners here in Shanghai – this contract is worth at least $3.5m of business for new peripheral vascular products and is an important part of our global expansion which is planned to create at least 20 new jobs over the next 2-3 years”.

Speaking from Shanghai, Minister Bruton said: "At the heart of our Action Plan for Jobs is the development of a powerful engine of Irish enterprise alongside the strong base of multinational companies we have in Ireland. ArraVasc is a great example of what we are aiming to support - here is an Irish company, operating in a sector of traditional strength for Ireland, manufacturing products to the highest international standards, winning new contracts in fast-growing foreign markets, and creating jobs in Ireland. Today's announcement of a multi-million euro deal with Shanghai Micro Medical, which will result in the creation of 20 new jobs, is very welcome and represents a great achievement for ArraVasc. I wish them every success on this project".

ArraVasc is the new name for Cappella Medical Devices Ltd, which has been based in Galway, Ireland since 2007.
Posted by Editor in Chief at 06:05