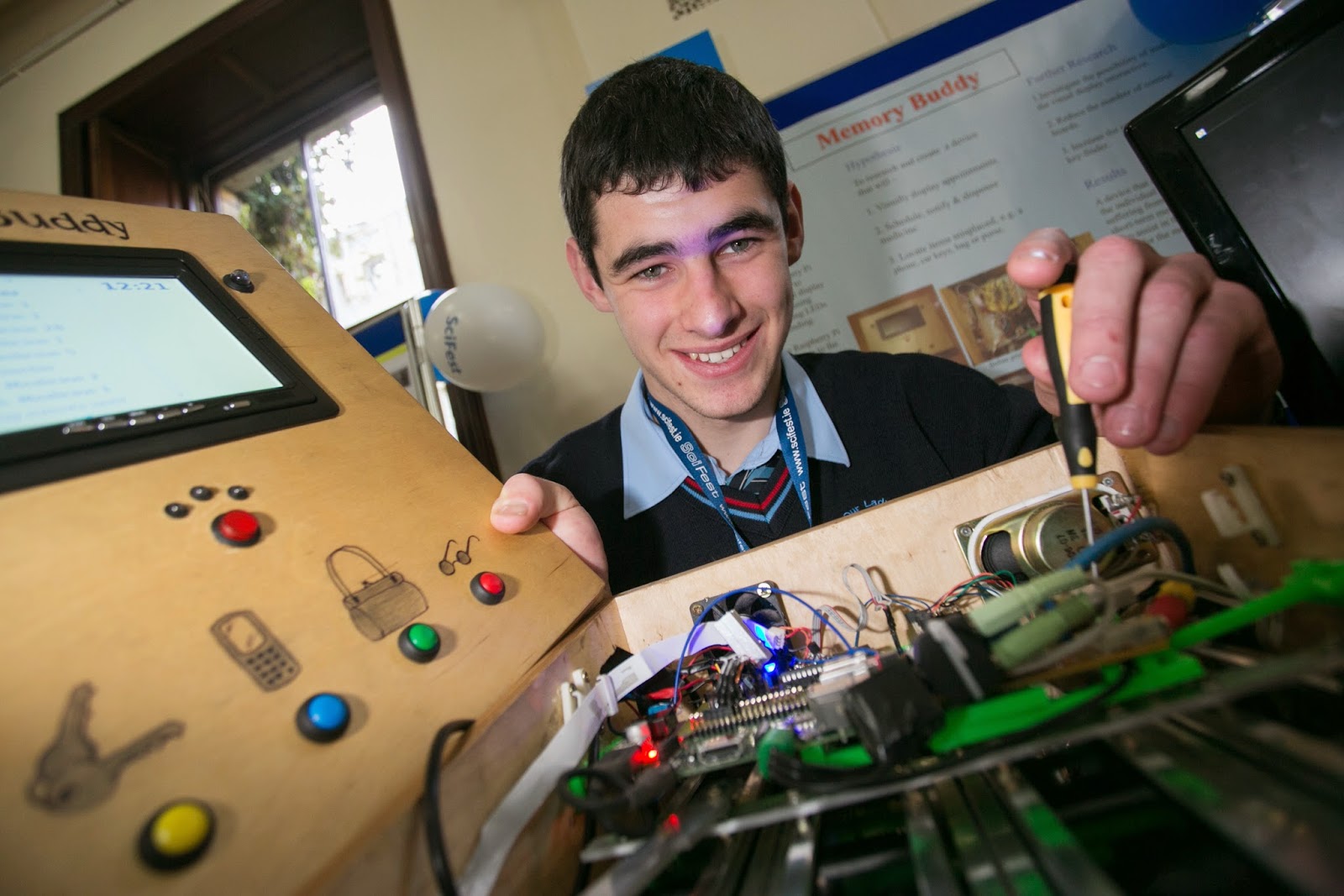 Christopher Carragher, a sixth year student from Our Lady’s Secondary School, Castleblaney, Co. Monaghan was this afternoon named the overall winner of SciFest 2014, for his technology project Memory Buddy. SciFest is an all-island science initiative which fosters active, collaborative and inquiry-based learning among second level students. This year saw a record number of over 6,000 students exhibiting their projects in local and regional science fairs across the country. Christopher was one of 29 students who went on to exhibit their 15 STEM (science, technology, engineering and maths) projects at the national final held in the Marino Conference Centre in Dublin today.

The prize includes the opportunity to represent Ireland at the Intel International Science and Engineering Fair (ISEF) 2015 in Pittsburgh, Pennsylvania.

Christopher’s project was the result of concern about the signs of short-term memory loss being exhibited by a family member and he set about designing an automated system to aid people with memory loss. Memory Buddy is a complete system designed and programmed by Christopher. Using Google Calendar the Memory Buddy can alert the person about appointments and medication via flashing lights, sound and also via the TV. It includes a remotely controlled medicine drawer that presents the appropriate medicine at a particular time and there is a feedback facility that notifies a carer when medicine has or has not been taken. The system also includes an organiser that can be used to establish care rotas and appointments.

Sheila Porter, SciFest CEO, said: “This year there was a very high standard of projects exhibited at SciFest. All projects exhibited show that when students engage with STEM outside the classroom, they bring their learning to a new level and produce amazing results. Participation in SciFest helps students to develop the skills sets essential for the next generation of creative problem solvers and entrepreneurs. The innovation and the creativity on display at the national final is a testament to the hard-work and dedication put in by the students and their teachers. Christopher will be representing Ireland at the Intel International Science and Engineering Fair in the USA next year and I am confident Christopher will do us proud.”

Another significant award presented was the Long Night of Science in Berlin Award, which went to Dundalk sisters Rachael and Shannon Ní Dhonnachadha for their project which looked at the science of punching. A punch involves a rotation of the wrist resulting in a horizontal fist on impact – this was introduced at the end of the 19th century but with no documented reason for this change. Rachael and Shannon set out to investigate if rotating the write before impact improved the efficiency of the punch. They measured various aspects of a punch including force, acceleration and velocity and their results found that contrary to the current accepted practice, punching with a rotation of the wrist provides no advantage in punch force and overall not rotating the write is advantageous.

Congratulating the students on their achievements Damien English T.D., Minister for Skills, Research & Innovation said: “I was hugely impressed with the skill and level of research demonstrated by each project exhibited at the SciFest final. SciFest allows second-level students to put their analytical and scientific skills to the test. These skills are vitally important for continuing to build Ireland’s knowledge and entrepreneurial society and the students here today will have a very bright and promising future. Encouraging students to embrace learning experiences outside the classroom is vitally important because it allows students to identify challenges, research possible options and present solutions - SciFest is the perfect example of this. I would like to thank parents, teachers and your sponsors for supporting and nurturing our young people’s interest in STEM. It’s an interest that will inform them as citizens and could also lead to further studies on a career in the STEM area”.

Professor Mark Ferguson, Director General of Science Foundation Ireland and Chief Scientific Adviser to the Government said: “SciFest is a celebration of STEM and continues to go from strength to strength. I am encouraged to see so many innovative projects and in particular the level of research that has gone into each project. Initiatives like SciFest are important to help promote STEM among students because these fields hold great potential for the future prosperity of our economy and society. It is up to us as parents, teachers and friends to guide our young people towards rewarding careers in these fascinating areas.”