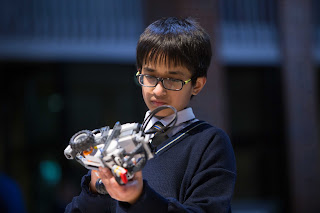 Teams of 2nd year students from schools across Munster built, programmed and battled their robots last night under the theme ‘robots and the internet of things’ in a bid to become the winner of the 2016 CEIA Schools Robot Competition. There could only be one overall winner however, and after an intense 3-hour battle the CEIA – Cork’s Technology Network – announced Presentation Brothers College, Cork as the overall winning team of the 2016 competition. Rossa College, Skibbereen were announced as the runners up while Ursuline Secondary School took home the prize for Best Poster Presentation.

The competition, which took place in Cork Institute of Technology (CIT), challenged students in teams of four to programme their robots to conquer tasks such as maze navigation, line following, and multi-task robotics using ultrasonic, touch, light and colour sensors. The competition is supported by CIT, University College Cork, Tyndall National Institute and CEIA member companies.


"Each year, the competition has a theme to highlight the many ways in which engineering and technology is embedded in our lives today. This year the theme was ‘robots and the Internet of Things (IoT)’– by building and programming these robots, students got an understanding of how objects embedded with electronics – such as robots – have network connectivity, allowing them to send and receive data,” said Dr. Eamon Connolly, Electrical and Electronic Engineering Promotion Officer, CEIA.


“A key aspect of this competition is that engineers, researchers and technologists from supporting institutes and companies provide mentor support for the teams throughout the competition – giving students an insight into potential careers in the industry,” he added.


As well as the robotics challenges, the teams also made Posters and kept project log books to document their work. Since the competition began in 2004, almost 1200 students have been introduced to the world of robotics, electronics and sensor technology, as well as problem solving, teamwork and making scientific presentations.

“Cork is home to many Information and Communication Technology companies who provide challenging and rewarding careers for people interested in driving technological change. This competition hopes to foster interest in the next generation who will go on to become the engineers helping to grow and develop these companies even further,” said Valerie Cowman, Skills and Education Chair of the CEIA.

Prizes for the competition were kindly sponsored by Logitech Ireland Services Ltd., and included a high spec Toshiba Laptop for the winning school plus 4 Logitech UE Boom speakers for members of the winning robotics team (retailing at €199 each). For more information, seewww.ceia.ie.
Posted by Editor in Chief at 09:26