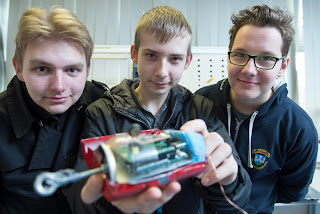 Teams of Transition Year students from across Cork designed, built and launched mini-satellites made from cans at the regional final of the Cork’s technology network CEIA and ESERO (European Space Education Resource Office) Ireland CanSat competition on Saturday. The CEIA announced Glanmire Community College as the overall winning team who will now go forward to represent Cork at the CanSat Ireland National Final, taking place in Birr Castle on 15 April 2016. The winning team from the national competition will represent Ireland in the European competition in June 2016.

Speaking at the event said Dr. Eamon Connolly, Electrical and Electronic Engineering Promotion Officer, CEIA said: “CanSat is a unique space project that simulates a real satellite which fits into the volume of a soft drinks can – students launch their own satellite and get first-hand practical experience of a real space project. This initiative is designed to encourage and excite transition year students as to the possibilities of a career in science and engineering.”

Teams from Glanmire Community College, St. Brogans, Bandon and Colaiste An Chroibhin, Fermoy were competing for a place at the CanSat national final. Each CanSat was required to measure the air pressure and air temperature after release and during descent, teams then had to display the data collected in a graph and present their individual results to the judging panel.

Each team also had to fit all the major subsystems found in a satellite to their CanSat including power, sensors and communications – and provide a parachute to ensure the can had a gentle landing.

“I would like to congratulate Glanmire Community College on their achievement, but I would also like to acknowledge the incredible work of the other 4 teams – each one did a fantastic job, the quality of the work this year was incredible. I would like to thank the individual mentors who worked tirelessly with the teams in the run up to the final. I would also like to thank our judges and regional partner CIT,” said Valerie Cowman, Skills and Education Chair of the CEIA.