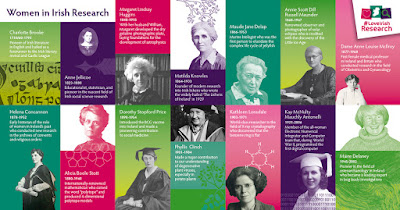 The Irish Research Council has released a specially commissioned infographic highlighting the achievements of women in Irish research in advance of International Women’s Day 2016 which takes place tomorrow.

From pioneering research into bog bodies to laying the foundations for the development of astrophysics, historically, Irish women have an impressive record in terms of research discoveries and breakthroughs.

Among the women included in the infographic are internationally renowned mathematician, Alicia Boole Stott; Dorothy Stopford Price who introduced the BCG (tuberculosis) vaccine into Ireland; Kay McNulty Mauchly Antonelli who – as a member of the women only Electronic Numerical Integrator and Computer team – programmed the first digital computer during World War II; and Charlotte Brooke, a pioneer of Irish literature in English who is hailed as a forerunner to the Irish literary revival.

The Women in Irish Research infographic is part of the #LoveIrishResearch initiative by the Irish Research Council which aims to increase public awareness of the important research being conducted in higher education institutions throughout the country.
Posted by Editor in Chief at 09:34