Irish student wins second place in the world for his study into the use of pine needles in biodiesel! 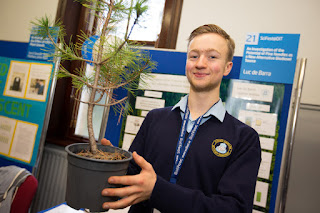 Lúc’s project investigated whether Pinus sylvestris (Scots Pine) needles which he harvested from sustained managed forests in his native Wicklow could be used as feedstock for biodiesel. Oil was extracted by a process of transesterification whereby compression and steam distillation were used to remove the oil from the pine needles. Having demonstrated that pine needles were unsuitable for biodiesel he went on to show that they had distinct potential for other areas of the bioenergy sector, particularly in the development of a sustainable aviation fuel and high performance fuel additives.

Sheila Porter, SciFest CEO, said: “We are very proud of all the students that compete at SciFest and it is great so see winners such as Lúc develop their projects and go on to further successes. It is so important to promote STEM both inside and outside the classroom so that students develop an interest and carry it forward. Lúc’s project is very important as society seeks to use other sources of energy besides fossil fuels. He has done himself, his family and Ireland proud today.”

Congratulating the students on their win, Emer Barry, Education Programme Executive, SEAI said: “INESPO 2016 has a very high standard of entries and on behalf of SEAI I wish to congratulate Lúc on his incredible success. He developed an idea that he was interested in, he took it to an international level and he won for his country. His focus on biofuels shows that he is engaged with the important issues of the day and it is great to see young people seeking to find a solution to some of the challenges facing the world today. I am sure he will go on to other great achievements in the future.”