Technology could boost global economic output by $2 trillion by 2020 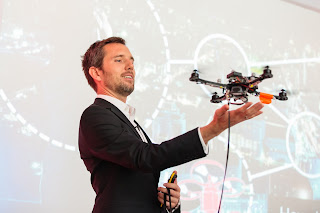 Robots will outnumber human beings, there will be more driverless cars than traditional vehicles and drones will be used to deliver pizzas to our door. These are just some of the technologies that could transform our lives within the next 20 years according to research released to mark the start of London Technology Week 2016 1.

The findings highlight healthcare as a key industry set for change with Britons predicting that they will no longer visit the doctor when they get ill but will instead consult their GP from home using virtual reality technology. A large number of people also believe that 3D printers will be used to produce human organs, potentially removing the need for human donation, while just under half of those surveyed think the world’s first cloned human will have been born by 20361.

The survey, which was commissioned by London & Partners, the Mayor of London’s promotional company, is inspired by a series of predictions put forward by Imperial College London’s Tech Foresight research team and reveals the technologies consumers think will disrupt traditional industries and drive forward the growth of London’s tech sector.

The Mayor of London Sadiq Khan said: “London Technology Week shines a light on this hugely important sector of the economy and demonstrates how our city is open to trade, ideas and people from across the globe. Tech-savvy Londoners welcome new digital advances that are going to revolutionise the way that we live and it is crucial that we harness those ideas to help the capital work even better as a city. As someone who has helped to run a successful business, I look forward to supporting the tech sector so it goes from strength to strength over the coming years.”

The study, which asked over 2000 people a series of questions about how they believed their lives would be transformed by technology also identified fashion as another industry ripe for change, with over half of Britons predicting that we will regularly wear clothing connected to the internet within the next twenty years1.

Professor David Gann, Vice President Innovation at Imperial College London said: “London’s technologists, scientists, medics and entrepreneurs are creating the future. No city in the world enjoys London’s quotient of talent, technology culture and capital. It is a potent combination.

“London is an environment where ideas flourish, design and innovation is embraced and new technologies are transforming our lives for the better. In London, we don’t stand still. Through our Tech Foresight team, Imperial Business Partners is taking some of the world’s finest minds from business and academia to predict how whole industries will transform within two decades. By considering breakthrough discoveries taking place in labs today, they help businesses look ahead to tech-driven trends and markets that will shape our future.”

London Technology Week is a celebration of the entrepreneurs, innovators and companies making the city’s thriving tech hub one of the best in the world. A recent report from EY ranked London as second only to Silicon Valley as the most likely place to produce the world’s next tech giant.

London’s tech community is also recognised as the most diverse in the UK, with early findings from research to be released in full later this week by technology recruitment firm Mortimer Spinks and ComputerWeekly.com revealing that London is the best location in the UK for women to build their businesses. However, further analysis of the findings suggest there is still a lot of work to be done, with more than half reporting less than 15 percent of their tech teams are female 2

The Mayor of London, Sadiq Khan has stated that he wants the tech sector to be open to all Londoners and aims to reverse the under-representation of women by encouraging more females to work in the industry.

Eileen Burbidge MBE, Partner at Passion Capital and Chair of Tech City UK said: “As a truly international city, London is one of the world’s largest, most inclusive and diverse technology hubs with a range of opportunities for talent of all backgrounds. The breadth, depth and creativity of our expansive talent pool has helped London to become a world leader in areas such as fintech, e-commerce and cyber security, just to name a few. We are already seeing technology disrupting traditional industries, but in years to come we will no longer be talking about the digital tech sector in isolation. Technology and digital will be integrated into every part of the economy.”

This year’s London Technology Week will focus on London as a centre for the convergence of disruptive technologies and their impact on traditional industries such as fashion, music, financial services and healthcare.

Gordon Innes CEO of London & Partners said: “London is a world-class destination for culture, science, business and technology. When you combine this with our strong culture of innovation and entrepreneurship, London has the perfect conditions for the convergence of disruptive technologies with traditional industries. From fashion to financial services, London’s technology businesses are at the forefront of developing the cutting edge technologies which are creating growth for the city’s economy and have cemented London’s status as one of the world’s leading technology hubs.”

With over 300 events taking place across the capital, London Technology Week 2016 is as much a celebration of London’s leading role in the ‘here-and-now’ of our digitally driven economy, as is it about looking to the future. It is about recognising the next wave of technologies that will redefine our world. About creating a growth environment for innovators, researchers and developers. And about connecting the entire tech ecosystem to drive the UK’s development as a fully connected digital society. With events covering everything from autonomous vehicles and smart homes, to advanced robotics and AI, London Technology Week offers a unique environment of live events, face to face networking, discovery and learning.

The launch event will also include a first of its kind fashion technology showcase and a selection of innovations from Imperial College London students.

McLaren will also showcase their Formula 1 car and talk about the convergence at the heart of their rapidly growing McLaren Applied Technologies arm that takes insights from racing to create high performance in other sectors.

Ian Rhodes, chief executive of McLaren Applied Technologies said: “McLaren is foremost about innovation. Using insights, ideas and capabilities hot housed in the competitive world of motor racing, we create step-changes in performance across other sectors. We take, for example, the approach used by our F1 strategists to make the best call during a race and work with KPMG to apply it to predicting the financial health of companies. That kind of innovation is crucial to the reputation of London as one of the world’s financial centres. Being plugged into the talent pool that London has to offer is vitally important to us as we’re now competing with the likes of Silicon Valley for the best and brightest tech talent rather than just the traditional engineering roles people would normally associate with McLaren.”

Separate research from Accenture Strategy recently revealed the impact of digital on the global economy. The Digital Disruption: The Growth Multiplier report estimates that the digital economy currently represents 22.5 per cent of the world economy. By optimising the use of digital skills and technologies, global economic output could be boosted by $2 trillion by 2020. For the United Kingdom specifically, that could mean an additional £58 billion in economic output by 2020.

The report also highlighted the impact of digital across a range of industries. In the United Kingdom, the industries that currently have the largest percentage of digital output include Business Services (ranking at 56 percent), followed by Financial Services (54 percent), and Communications (49 percent)3.

“Digital is unchartered territory, steeped in unknowns, which can feel uncomfortable for risk-averse leaders who have always done things in a particular way. But those ways are no longer delivering. Just like digital disruptors are paving new paths and making up the rules as they go, large incumbents have the opportunity to do so too,” said Bruno Berthon, managing director, digital strategy global lead, Accenture Strategy. “Traditional industry incumbents can pivot to digital by adopting a start-up mentality, embracing a platform-based business model, developing a partner ecosystem, focusing on delivering new value to customers and getting comfortable with trial and error.”

London Technology Week 2016 will see a record number of events take place across the capital from 20-26th June. Hundreds of international companies and tens of thousands of visitors will come to London to take part in more than 300 events organised as part of London Technology Week.
Posted by Editor in Chief at 09:27