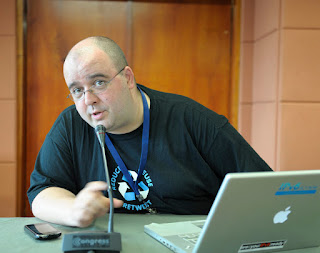 Michele Neylon, CEO of Blacknight, has been elected to one of the primary policy-making councils of ICANN, the international organisation which coordinates the Internet’s naming systems.


ICANN, the Internet Corporation for Assigned Names and Numbers, is a global non-profit organisation formed in 1998. Just last month it completed a transition process whereby it took over full responsibility of Internet addressing systems from the US government.

ICANN’s Internet governance is based on what it describes as a ‘multi-stakeholder model’. One such group of stakeholders are the domain registrars: companies which provide a domain name registration service to the public.

Blacknight is Ireland’s leading domain name registrar and web hosting company, and Michele Neylon has been involved with ICANN for many years.

He recently completed three terms as chairperson of ICANN’s Registrar Stakeholder Group, and at ICANN's General Meeting in Hyderabad, India, he took his seat as a representative of the registrars, on the council of the Generic Names Supporting Organisation (GNSO).

The GNSO Council of ICANN is responsible for policies regarding generic Top Level Domains (gTLDs). These include traditional domains like .COM, and .ORG, but excludes so-called country-code domains, such as .IE or .UK.

In recent years there has been a huge expansion in generic domains, to several hundreds of new gTLDs, ranging from .LIVE and .BLOG, to .BEER and .PIZZA, to name just a few.

Michele Neylon is the first Irish registrar to serve on the GNSO Council of ICANN, and he acknowledges that he has a particular perspective on global Internet issues.

“Blacknight is Ireland’s largest domain registrar, but we are small by US standards. Similarly, European registrars operate under a different data protection regime, as well as catering for a more multilingual customer base. Part of my job is to make sure that we find solutions that work for registrars of all sizes and in all regions”, he says.
Posted by Editor in Chief at 20:34