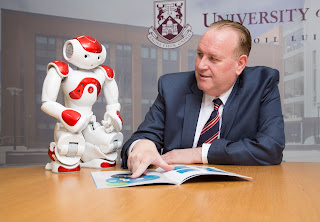 Creative professionals such as graphic designers, artists and even science fiction writers will be required to help develop successful software in the future, according to a new report developed by an Irish research team for the European Commission.

The report¹ written by Lero, the Irish Software Research Centre, was commissioned by DG Connect (Directorate-General of Communications Networks, Content and Technology) to address how to maximise the benefit of European software research funding under the €80 billion Horizon 2020 programme.

The report finds that software has reached what it calls a “Software Crisis 2.0” bottleneck due to an explosion in demand across most industries from medicine and healthcare to automotive and mobile telephony combined with the increased complexity needed to serve these sectors.

For example, the study quotes research² which finds that a paper stack print out of the lines of code required in a car in 1978 would have been about 12 centimetres high. By 2005 this was 50 metres tall and 150 metres by 2013. It is estimated that this will increase to 830 metres by 2020 or taller than Dubai’s Burj Khalifa – currently the tallest man made structure in the world.

“It is well accepted that Europe will require more software professionals to cope with this explosive demand and complexity. But such is the widespread application of software today across all sectors that we will need input from creatives in the visual and written arts in order to help develop software that can be understood and implemented by end users,” commented Prof Mike Hinchey of Lero and co-author of the report along with Professors Brian Fitzgerald and Tiziana Margaria (University of Limerick) and Professor Brian Donnellan (Maynooth University).

The study quotes research³ which finds that despite the advances in software such as agile development, management believes that more projects fail now than five or ten years ago. Almost a third of software projects will be cancelled before completion and over half of those that are completed will cost 189% of their original estimates.

“The fact is that most of today’s successful companies from music and booksellers to taxis and travel are effectively software firms,” commented Professor Hinchey. “And the traditional companies which they are overtaking are reverting to becoming software-intensive organisations. This is placing tremendous pressures on the software industry’s ability to deliver.”

The report recommends that EU initiatives should not mirror those in the US but recognize the increasingly broad reference of software.

“It is not sufficient to allow each industry sector, nor each member state, to set its own research agenda, as this will result in duplication of effort and inefficiencies, leaving Europe in a weaker position vis-à-vis the rest of the world” states the report.
Posted by Editor in Chief at 06:55