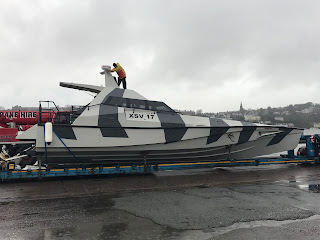 While the New Year often prompts optimistic resolutions, Safehaven Marine MD, Frank Kowalski, is determined to set a new world record in 2017 to circumnavigate Ireland via Rockall. He plans to deploy his newest and fastest Naval patrol & search and rescue (SAR) vessel, Thunder Child, to achieve the gruelling mission. Safehaven Marine launched the new 60ft high speed boat, Thunder Child, in Cork harbour today (Friday) and further speed and storm testing will take place in the coming days to prepare for the mission.

Almost 1 year in development and manufacture, Thunder Child is valued in excess of 1 million euro, and is equipped with many exciting features such as wave piercing technology and surface drive propulsion. The boat will be undergoing a number of tests in the stormy conditions promised by Met Eireann over the coming weeks, as part of testing her seakeeping and endurance preparations for the circumnavigation in summer 2017.

“We have been designing and building boats here in Cork for almost twenty years now, and our vessels are in use worldwide in the Middle East, Africa, Europe and Asia. We continuously innovate to build faster, stronger, more effective, multi-functional boats that are not only built for the incredibly difficult conditions at sea, but also high speed marine operations,” says Frank Kowalski, MD, Safehaven Marine.

“Setting a new record for the circumnavigation of Ireland via Rockall is a real challenge for any vessel. The route involves a 1,000 km open ocean crossing into the North Atlantic, one of the roughest and most notorious seas on the plant. But for Thunder Child, I am confident that we will set a new record and have a safe, albeit nail biting, trip!”

The trip will involve several hours’ navigation in the dark and will inevitably encounter rough conditions which will put incredible stress on both vessel and crew. However Thunder Child is well equipped for all such challenges, with HD radar, high spec thermal night vision cameras, shock-mitigation seating, a range of over 750 nautical miles, surface drive propulsion and advanced composite construction that is both strong and light give the boat its unique properties, another of which being that it is probably the most striking and stylish boat of her type.

As an internationally recognised designer and manufacturer of high speed commercial craft, Safehaven Marine based in Youghal and Little Island, has already built a reputation for exceptional sea keeping capabilities, stealth and strength. The company’s boats are deployed internationally for search and rescue missions, security and patrolling in open water and piloting in harbours as well as military and naval operations.