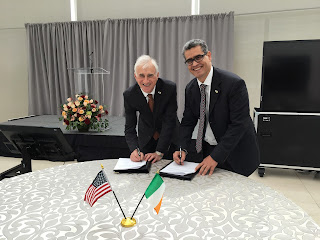 An Taoiseach Enda Kenny TD has announced the signing of a new agreement between Lero, the SFI Research Centre for Software, and the Fraunhofer Center for Experimental Software Engineering at the University of Maryland, which will see both centres of excellence engage in extensive research collaboration in the coming years. The collaboration will focus on evolving critical systems and digital transformation.

The MoU was signed as part of a broader Science Foundation Ireland (SFI) programme of engagements in the U.S. which included the awarding of the prestigious SFI St. Patrick’s Day Science Medal by An Taoiseach Enda Kenny TD.

Speaking of the announcement, An Taoiseach Enda Kenny TD, said: “I am delighted to announce this new research agreement between the SFI-funded Lero Software Research Centre and the Fraunhofer Center for Experimental Software Engineering in the University of Maryland. Ireland’s reputation as a centre of ICT excellence is unrivalled. By growing and expanding international links through partnerships and collaborations with world-leading organisations, we will create further opportunities for innovation.”

Professor Mike Hinchey, leading researcher at Lero and consultant to NASA, said: “The Fraunhofer Institutes are the global hallmark of excellence for application-orientated research and it is a tribute to our team of researchers in Ireland that the Fraunhofer Center for Experimental Software Engineering Research is committing to this research partnership with Lero in areas of synergy.”

Prof Hinchey, who has previously acted as Director of the Software Engineering Laboratory at NASA Goddard Space Flight Centre in Maryland, added: “Fraunhofer research has been adopted by major US organisations such as NASA and the Food and Drug Administration (FDA), amongst others.”

“The SFI Research Centre, Lero, is recognised as a world class research centre with research skills and interests that complement our own. We look forward to collaborating with the Lero team,” said Prof Adam Porter, Executive and Scientific Director, Fraunhofer Center for Experimental Software Engineering.

Professor Mark Ferguson, Director General of Science Foundation Ireland and Chief Scientific Adviser to the Government of Ireland, said: “I very much welcome this exciting cross-Atlantic collaboration between Lero, the SFI Research Centre for Software, and the Fraunhofer Center for Experimental Software Engineering in the University of Maryland. It is further evidence of the strong links between American and Irish research teams, and demonstrates how highly regarded Irish research is internationally. This collaboration presents us with an excellent opportunity to promote closer linkages between our top-class researchers and their peers across the globe.”