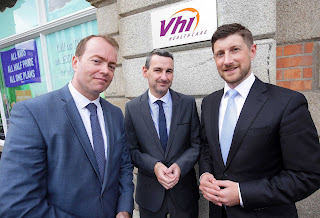 Nutanix, a leader in enterprise cloud computing, has announced the implementation of its enterprise cloud solution for insurance provider, Vhi Group. Currently supporting more than one hundred developers and testers, the new platform is designed to increase efficiencies and reduce Vhi’s IT costs. It has already led to time savings for the company’s IT department by enabling new remote users to be enrolled in minutes.

The Nutanix Enterprise Cloud Platform also allows Vhi to experience the benefits of desktop virtualisation for the first time. These include a reduction in the physical footprint of data centre based desktops, an anticipated lower total cost of ownership (TCO), improved availability and business continuity, and increased developer efficiency in development and test environments.

Prior to its installation, Vhi had supported its network of developers by giving them remote access to individual desktop PCs located in its data centre. However, space constraints meant that this was not a viable long-term solution. Nutanix’s web-scale platform enabled Vhi to smoothly deploy virtual desktop interface (VDI), providing remote users with more secure and streamlined access to critical applications.

Conall Lalor, datacentre manager, Vhi Group Services said: “At Vhi we were still using desktop PCs to provide remote access to power users like developers. Not only were these PCs consuming valuable floor space and resources, but it was time and labour intensive to set them up and monitor them accordingly, and also expensive.

“Nutanix’s solution was ideal for our needs. An all-in-one solution, it allowed us provision desktops more rapidly and in a more environmentally friendly way, thus reducing power, cooling and space requirements. It also helped us to simplify our existing virtual environment.”

Vhi’s channel partner, Zinopy, installed the new system, and was able to have the hardware up and running in under two weeks. Aidan McEvoy, sales director, Zinopy commented: “It was a great experience to work with Vhi on the implementation of Nutanix’s enterprise cloud solution. The adoption of this platform will help Vhi to expand its infrastructure and continue to provide great customer service.”

“Implementing the Nutanix solution has given us better performance and control when provisioning desktop PCs to our remote workers. As well as this, it has meant that we can easily redeploy and redistribute devices, allowing us to make the most of valuable technology. The solution complements and simplifies our virtual environment, giving our remote workers more flexibility than ever before.”

Paul Phillips, regional senior director, Nutanix, said: “The Nutanix deployment represents a real commitment to virtualisation from Vhi. The outcomes were tangible and very positive overall. The flexible deployment model and easy scalability is driving a new era for the business, improving both flexibility and performance.

“The solution has taken the strain off Vhi’s IT department, allowing them to reduce the time spent enrolling new users and focus their skills on continued business development.”
Posted by Editor in Chief at 22:13