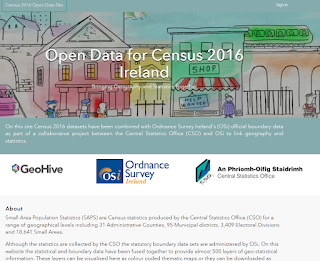 Esri Ireland, the market leader in geographic information services, today announces that Ordnance Survey Ireland (OSi) and the Central Statistics Office (CSO) have launched a new website on its ArcGIS Open Data digital mapping platform. The new website, available athttp://census2016.geohive.ie/, presents data gathered during Census 2016 in a clear and legible way, and aims to make geographical and statistical information gathered during the census more accessible. It will also get this information directly to public sector decision makers and members of the public. With the launch of the new website, the Census 2016 Small Area Population Statistics (SAPS) released by CSO on 20th July are available to the public for the first time.

The website was built by OSi using Esri Ireland’s ArcGIS Open Data platform . ArcGIS is the world’s fastest growing Open Data platform with 4270 implementations serving almost 75,000 data sets. This new site will provide public policy makers, researchers, academics and public stakeholders with access to over 500 layers of authoritative OSi boundary data that has been enriched with 2016 Census statistics provided by the CSO.

Speaking about the launch of the website, Eamonn Doyle, CTO, Esri Ireland, said: “This website is a powerful tool that provides public sector decision-makers and civil society groups with access to comprehensive data about population demographics in Ireland. As well as this, as this site is open to the public it will enable people who have taken the time to fill in their census forms to explore the results, and learn more about their areas and population trends in Ireland on the whole.”

Data from Census 2016 can be visualised in map form across 31 Administrative Counties, 95 Municipal districts, 3,409 Electoral Divisions and 18,641 Small Areas. For the first time, this site provides access to the raw data, allowing users to manipulate the data, filter it, and combine multiple layers to create their own maps which they can then save and embed in other applications. The site also enables users to download the data into their own software for analysis or connect to it via a series of Open Standards APIs. All data on the site is licenced under Creative Commons Attribution version 4.0 CC-BY in line with Open Data best practice.

This work stems from a joint project between OSi and CSO that aims to create a data infrastructure for geography and statistics that will ultimately facilitate evidence based decision making across the public sector.
Posted by Editor in Chief at 11:11